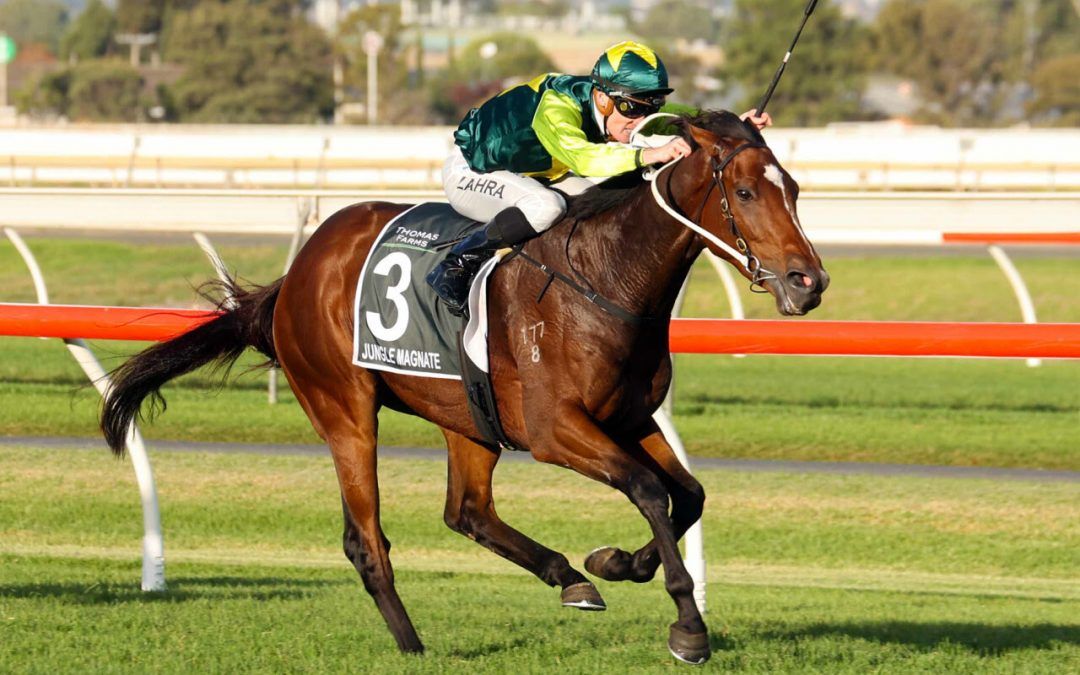 Jungle Magnate’s stablemate Son Of Emperor ($51) raced far too freely in the lead, ensuring the Derby turned into a stamina test with several on-pacers collapsing through the field approaching the home turn.

Fancied pair Alegron ($3.10 favourite) and Detonator Jack ($3.50) didn’t enjoy a clear passage through the packing field, as opposed to Jungle Magnate ($7.50), who chartered a wide course around the perimeter to score by 1.75 lengths.

Yaphet ($10) settled last and closed strongly for second, with Detonator Jack and Alegron strong on the line for third and fourth respectively in a Derby that sorted the contenders from pretenders.

Price and training partner Michael Kent Jnr combined with Mark Zahra for a feature-race double, as Jungle Magnate became their second winner at the venue within an hour following the Listed Adelaide Guineas (1600m) win of unbeaten colt Illation.

“He’s one of the best Group 1 riders in Australia, there’s about four of them and he’s one of them,” Price said of Zahra.

Zahra was mindful the 148th running of the South Australian Derby had the potential to be truly run and rode Jungle Magnate accordingly.

“He’s a horse that can get pulling and there looked to be good speed on paper, so my main objective was to get him to switch off,” Zahra said.

“I just came out on his neck and we were back near last, but he was very relaxed, which was good for him and it was just a matter from the 1000 metres onwards to pick the right path to go through.

“They looked to be jamming up a bit too much towards the inside for me, so I elected to come out and we ended up going around them.

“I was asking him a bit early, but he’s got a big stride, he’s a lovely stayer and I just wanted to keep his momentum going and he was strong – it was a very good win.”

Zahra guided Jungle Magnate to a 1400-metre Sandown Hillside maiden win as a two-year-old last June and Price blamed himself for the gelding being unsuccessful in four subsequent starts that spring.

Jungle Magnate has won three of his four starts this campaign, which includes victories in the Mornington Guineas (1600m) and G3 Chairmans Stakes (2000m) at Morphettville a fortnight ago.

“He won his first start over 1400 metres, so I thought we could win a (Caulfield) Guineas with him,” Price said.

“I had him set for the Guineas and first-up he went too slow (running eighth in a three-year-old handicap at Sandown Hillside) and I thought, ‘What am I going to do here’?

“So I had to change mid-prep, which cost him I think, when he ran in the VRC Derby he had enough and was on the way down.

“We had it pegged right this time in, he had a good spell and a good prep and we had a nice circle around this race as his peak point (of the campaign) and I think it was a nice ride by (Mark) Zahra.”

Price indicated that it would be his preference to spell Jungle Magnate ahead of an ambitious four-year-old season rather than fly to Brisbane for the G1 Queensland Derby (2400m) on May 28.

Price not only trained the sire Tarzino, who completed the Victoria Derby and Rosehill Guineas double in 2015/16, but also the Gerry Harvey-owned Casino Prince dam The Love Of Money, who was unplaced in two maidens at Terang and Bairnsdale in December 2015.

Tarzino stands at Westbury Stud in New Zealand, owned by Harvey, with the prominent breeder retaining a part-stake in Jungle Magnate.

Tarzino will stand the 2022 breeding season at NZ$15,000, with his other Stakes winner being last year’s G3 Grand Prix Stakes winner Gypsy Goddess.