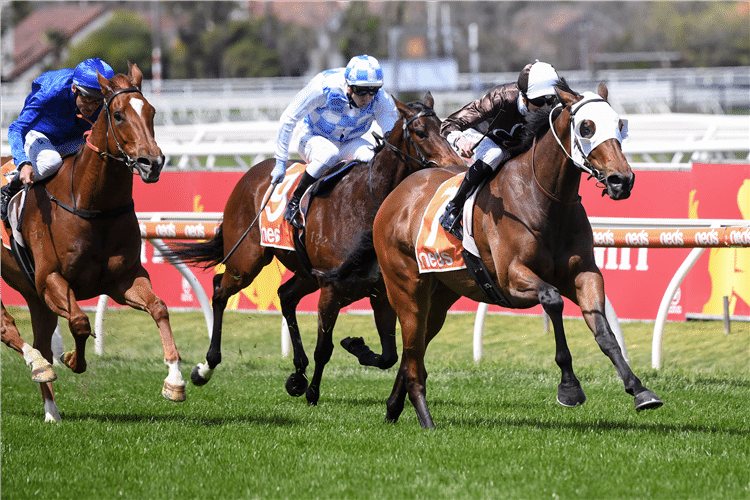 On Caulfield Guineas Day Lombardo went into the Listed Village Stakes with two wins in a row from his previous starts. Lombardo went on to win by 0.75L.

Post race Mick Price said “I think that is the benefit of sending him down to the beach. They do a good job down there, the team.

“We rotate them so he’s been at Caulfield for a couple of weeks now. It is good to give them a change of environment. The horse is thriving.

“This was the build-in to a possible run in the Manikato. Why not?

“13 days to the Manikato, why not. He can run along, he’s got a big stride. He doesn’t have to be ridden off the speed, he’s versatile but he’s a first three or four type horse.

“I think it is great for Cathy Hains. She went into bat for her own horse and said ‘I’ll take it home to my property and spell it for three months for nothing’, and hence it has got her colours on so I’m very happy for her. She backed her horse.

Towards the Manikato: “You’ve got to progress, don’t you. I know he only won a benchmark 84 there but I think given the horse handles Moonee Valley it is worth it.”

“He’s been in great form. I’ve been watching him and looked to get on him today. He has a presence about him. He’s a big strong type and the race unfolded perfectly for him.

“If I had to be a bit critical of myself I put him under a little bit too much pressure coming around the bend but his class came into play once we balanced up and he continued that good form.

“He was probably switching off out in front a little bit. I feel as though if something had challenged him he would have had a bit more in the tank. The track is quite firm out there today so we didn’t have to do any more than we had to.”