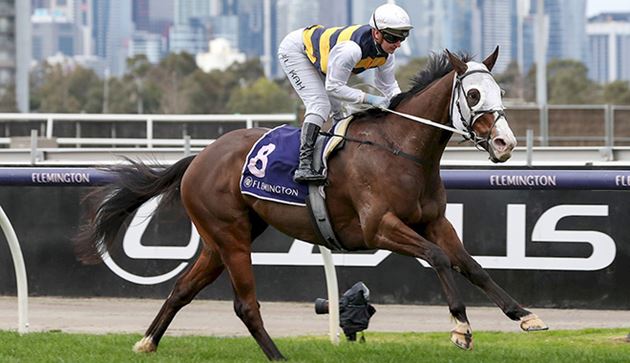 I’m Thunderstruck signaled his likely return to Stakes company next season with a dominant four-length victory in the $135,000 K.A. Morrison Handicap (1400m) for three-year-olds at Flemington on Saturday.

I’m Thunderstruck, who is trained by Mick Price and Michael Kent Jnr, settled in the second half of the field under Jamie Kah and relished the fast early tempo established by Japery, who rushed through the first 1000 metres of the race in 59.75 seconds.

I’m Thunderstruck resembled a lightning bolt down the Flemington straight as he clocked his final 600m in 33.68s, more than a second quicker than any rival in the race, running in a jagged line with a willingness to lay inwards while placed under pressure.

Tuvalu settled third, rode the fast pace and ran creditably to suffer his first loss at his third outing while Hickok finished third ahead of the fading Japery, who did a decent job to stay on for fourth.

“I thought it was really good, Mick and I were hoping he would do that,” Kent Jnr said.

“He’s got a really good turn of foot and today was his D-Day, big track, had every chance and I thought he quickened up really excitingly.”

Kah replaced Mark Zahra aboard I’m Thunderstruck on Saturday, with Zahra enjoying a short break ahead of the start of the new season.

Kent Jnr disclosed that Zahra believes I’m Thunderstruck could measure up in Group company and is hopeful he’ll continue to progress through the grades but was unwilling to make any commitment on his future immediately after the win.

I’m Thunderstruck has raced five times for three wins. He won a 1000-metre two-year-old trial at Te Aroha on July 9, 2020 by three lengths when the track was rated Heavy 11, before being acquired by OTI Racing and joining Price and Kent Jnr from Matamata-based trainer Daniel Miller.

The gelded son of Shocking won his maiden at Caulfield on debut over 1200m in January before finishing fifth in the G2 Autumn Stakes (1400m), beaten 2.9 lengths by Poland.

Zahra rode I’m Thunderstruck under race conditions for the first time when he successfully resumed at Sale in a Class 1 Handicap (1200m) on a Heavy 8 track on June 2.

He then paid the price for jumping slowly at Caulfield in a three-year-old handicap over 1440m, with the rail out and the pattern of the day suiting on-pacers, when closing into third at his previous last start on June 26.