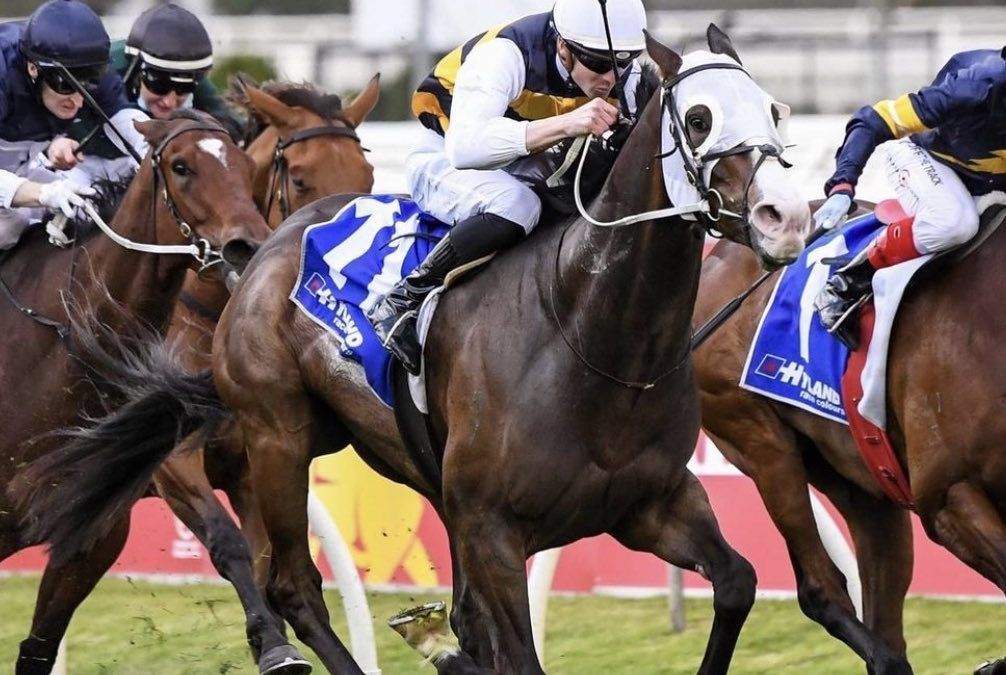 I’m Thunderstruck confirmed himself as a rising star of Australian racing by beating some of the best milers in the land in the $1 million Group 1 Toorak Handicap at Caulfield on Saturday at just his eighth start.

Co-trainer Mick Price confirmed after the former Kiwi had put paid to recognised G1 stars Tofane and Superstorm that I’m Thunderstruck is now bound for the third-richest race in Australia, the $7.5 million Golden Eagle (1500m) for four-year-olds at Rosehill in three weeks.

“That’s been the plan all along and he had to do it tough there,” said Price, who trains in partnership with Michael Kent Jnr. “He’s only had eight starts, so to win a Toorak at this stage of his career is some achievement for the horse.”

I’m Thunderstruck, who is part-owned and races in the colours of OTI Racing, is now the $3.70 favourite for the Golden Eagle in Sportsbet’s market.

Starting the $3.20 favourite on Saturday, I’m Thunderstruck had to work his way through the field before finally finding clean air in the home straight and he sprinted hard to beat Tofane ($11) by three-quarters of a length, with the same margin to the fast-finishing Superstorm ($9.50) in third.

“He didn’t get a chance to relax and travel. They were playing jockeys. They were trying to keep the favourite in, and for him to keep fighting, for a young inexperienced horse, it was a massive effort.”

Kent Jnr added that although the stable has always rated I’m Thunderstruck highly, he said it is remarkable that he could win an open mile handicap at just his eighth start.

“He was a big, flashy kind of horse and I never thought it would come this soon with him,” he said. “It’s very exciting. Hopefully he pulls up well. We blended prep two and prep three together. Now we’ve got three weeks until The Golden Eagle.

Winning rider Jye McNeil was obviously tickled with the victory.

“I’m pumped,” he said. “He really had to earn it today. A couple of different riders were out there to target him, which I suppose they’re entitled to at some stage.

“I thought it was a really brave effort the way he handled himself, even at the top of the straight we had to get a little bit physical to find clear space and then Tofane challenged late.

“He was super tough.”

Damian Lane said he felt in-form Kiwi visitor Elephant (eighth at $4.40) was found out by the pressure of the race, while Sir Rupert Clarke Stakes winner Sierra Sue tailed off last, with jockey Daniel Moor saying he hoped the mare had simply felt the firm track.