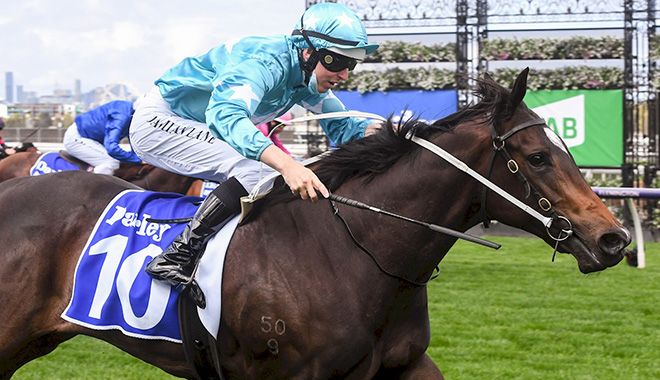 It hasn’t taken leading trainer Mick Price long to identify a genuine Blue Diamond Stakes and Golden Slipper Stakes contender for autumn following the blistering debut win of juvenile Get In The Spirit at Flemington on Saturday.

Ridden by Damian Lane, the Spirit Of Boom filly – who cost $110,000 at the Magic Millions on the Gold Coast as a yearling – showed incredible speed out wide on the course and despite racing alone with most of her rivals back nearer the inside rail, she simply proved too fast over the 1000 metres of the Maribyrnong Trial Stakes.

“I think she is a very smart filly,” said Price, who trains in partnership with Michael Kent Jnr. “She has trialled well and has never given us a moment of temperament or physical worry.

“She is very quick and she could go on and win a Group 1 in the autumn.

“My advice would be to aim for a Blue Diamond and a Slipper. And I’d spell her with regard to that.

“That’s my first thought but we do get a few different opinions in this game.”

Starting at $8 and finishing near the outside fence, Get In The Spirit had a two-length margin on the line from Godolphin colt Lascars ($9.50) with a neck to Rampant Lion ($7) in third place.

Notably, the Maribyrnong Trial Stakes last year was won by Ingratiating ahead of General Beau and those colts were due to clash again later in the day on Saturday in the Danehill Stakes.

Lane was suitably impressed also: “I must thank Mick Price and Michael Kent Jnr for putting me on her at the trials and giving me a spin on her.

“She gave me a great feel on that morning and they’ve obviously got a great knack of getting these two-year-olds going well and early and well educating them.

“She did all of that and she jumped quick, travelled well. She just had a little look at the mounting yard here when I went past and had to get her mind back on the job. But she had a bit in hand.

“She’s very quick, and quick through those middle stages, which is going to win her a lot of races.”